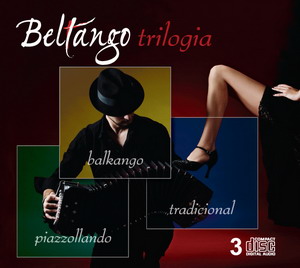 There is such a vast repertoire of tango music provided on this triple CD that it is difficult to know where to begin.

The sheer quality and quantity of music provided would easily have justified the release of three separate albums but here Beltango are making a “statement“, perhaps to capitalize on their success at the World Tango Festival 2007 held in Buenos Aires where they were the only European tango orchestra invited to play.

Beltango are a Serbian quintet formed in 1998 to play the music of Argentina , specifically tango. The group are headed by the husband and wife team of Aleksander and Ivana Nikolic.

He plays bandoneon and accordion; she plays piano and provides vocals, where required, with a very convincing south American accent. The rest of the band are : Jovan Bogosavljevic (violin), Bogdan Pejic (electric guitar) and Ljubinko Lazic (double bass).

The three Cd’s in this collection have been well defined in their content; all have their own personality and individual style. The first is, as its title “Tradicional“ suggests, is a compilation of many famous tango tunes from composers including Enrique Saborido, whose “Felicia” is the first track and a veritable “tour de force” for the violinist Bogosavljevic.

I will pick out two other personal favourites but all the pieces chosen are given truly excellent renditions. On “Nostalgias”, by Juan Carlos Cobian, the soft, breathy vocals of Ivana Nikolic make you believe you are in a club somewhere in Buenos Aires and the last track on this CD is not a tango at all but an instrumental version of a beautiful ballad by the singer and composer Carlos Gardel. “El dia que me quierias” is from the 1935 film of the same name that starred Gardel.

He is probably more well known nowadays as the composer of “Por una cabeza” which famously featured as Al Pacino’s tango in the 1993 film “Scent of a Woman”.

The second title “Piazzollando” is also a giveaway, featuring , exclusively, the music of Astor Piazzolla.

There have been many interpretations of his Tango Neuvo in recent years and it may seem superfluous to have yet another rendition. However, it is said that the quintet of bandoneon, violin, piano, electric guitar and double bass was Piazzolla's preferred setup and so Beltango are ideally formed to provide a selection of “genuine” performances.

Listen to their version of Libertango and perhaps you’ll get a better idea of Piazzolla’s intent.

All the tracks here are very well known but Beltango seem to give a freshness of approach on all these tracks, they could well be the best Piazzolla performers currently touring.

Having paid their respects to past masters the third CD “Balkango” takes us into unchartered waters.

We get a in effect a new genre – a mix of Balkan music and Argentinean tango – the composers are all European. The opening “Tango para Ella” is a wonderful, sensual slow tango and all the tracks here have something to recommend them.

Band members Nikolic and Bogosavljevic provide 2 of the tracks with the title track “Balkango” written by Nikolic himself.In all there is over 2 hours of superb music on this collection. It is an excellent introduction to the history and development of tango appealing to newcomers and afficionados alike. There is one other aspect however that has nothing to do with music but exudes throughout the music and we get an idea from the album cover.

Sensuality is an aspect that is sadly missing in the accordion world - this CD has it in abundance – playing the accordion/bandoneon can be cool, can be sexy! Buy this CD, turn off the lights, light a candle and hold your partner close.